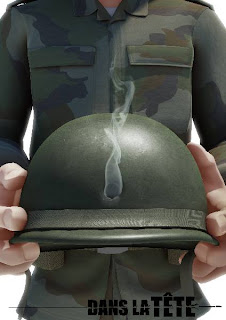 Weapons, bullets, sounds, shoots, guns, noise, destruction... You have to protect your motherland against the enemies. Your body is not yours, it´s for the fight. One mistake´s able to bring you up to other life. You can walk on the line or you can cross it.

Dans la tête tells the story about Antoine Bertrand. He´s 20 years old, he left his girl friend and join the army. Quickly on the battlefield he takes a head shot, the first day of war. The problem was that his "camera" (that records all the actions of his whole life) has been broken by the bullet. So, he needs to recover or fix it, and die on a different way. How do you protect your head inside a battlefield?
Created and animated by Alan Sellier, Gregory Damour, Anthony Gilles, Maxime Entringer, from de ESMA School of France, this comedy was produced mixing 2D and 3D technique, and was featured in lots of festivals and markets.
Publicado por Unknown en 15:15