Who's next? Who wins the game? 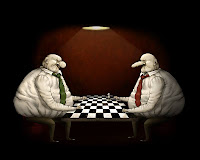 E2-E4 is a satiric animation about the violent political "games" created by Eduard Sidaruk from Belarus. Two very similar men are preparing a new game. With the same looking like chess, they started to grow up men, and then buildings, and then weapons, arms, bullets, tanks, armies, and then drop bombs, shooting and killing among them...

That's is a very funny game for them: play with lifes, families, cultures, scenaries, countries... humanity. Let's think about it! Why has this people got so much power? Nice esthetic and treatment of the animation work by Sidaruk who brings us a new and interesting point of view about the reality.
Publicado por Unknown en 16:26