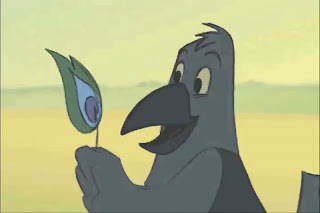 A wishful crow learns the hard way to be happy with his plain feathers rather than look ridiculous with someone else's pretty ones...

Kaukab Basheer presents us in Animacam her first film, representing India in the opera prima category.
This animated short was made using the traditional 2D and it was finished in the 2nd year of the studies of Kaukab, in the Animation Workshop at SVA. Five months working to get it, from planning to compositing.

Kaukab wrote again this story: a popular South Asian folktale that the artist like so much. She was assisted for two animator friends with the music and sound recording.

Love your feathers was ‘premiered' on April 28th in her classroom, sharing it with her partnets, and was released on May 6th 2009 at the SVA theatre in Manhattan.
The film was a very hard job: this animation consists of 560 traditionally hand-drawn drawings (not counting the backgrounds).
Publicado por Unknown en 17:34