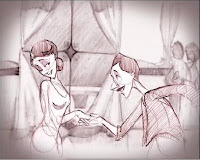 One boy, one girl... two secrets! That's the story of the mude animation work "Love in disguise", a 2D creation by Angeliki Salamaliki, one of the most popular animators of Greece.

Long before final name decided by Angeliki Salamaliki was 'Love in Disguise' after take decission of change the title. First title was 'Shall we Dance?' but the author thought that it was too obvious. Love in disguise was the Video of the month from the European Animation Center in Greece.
Publicado por Unknown en 17:53