Love your nose. Take care her with QUILTON. 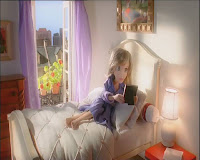 This advert for QUILTON is titled The Runaway Nose. The story of a girl who lost her nose because he didn't look after of her! She was missing her so much, and then, suddenly, she found the solution: QUILTON: Love your nose.

This commercial was made by ANIFEX and directed by the famous director Michael Cusack. To know more about this fantastic animator, read the following information:
Michael Cusack was born in Manchester, UK and moved to Adelaide, South Australia when he was 11 years old. His directing career started in theatre, where he also acted in various productions. This has given Michael an understanding of performance and movement which has contributed to his renowned ability to give incredible life and warmth to his animation characters. His first major award was an AFI award in 1985 for the short film Waltizing Matilda.
Publicado por Unknown en 16:55