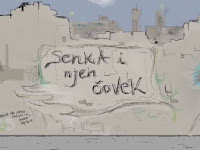 Marija Milanovic was born 1972 in Kraljevo. Graduated in animation from the "Dunav Film" Film School, in the class taught by professor Rastko Ciric - he also participates in Animacam with his animation FANTASMAGORIE- . The film "Shadow and its man" was her final exam (she has featured it in Animacam.tv, like the other two animation following below.)

Marija Milanovic is an experienced animator from Serbia. She was working for several years for different animations and her animations were representing the Serbian animation in lots of countries and festivals. She has given an incredible aportation in Animacam with three art works:

HOW DID THE LILY ARISE tells the story of a tragic love told in reflection of nature. Inspired by the song Ophelia by Arthur Rimbaud. Nature, plants, flowers... are starrings in this art. Taking a difficult point of view to see, but easy to feel, is one of the most well-known animations of the artist.

SENKA I NJEN COVEK (A SHADOW AND HIS MAN, English title) talks about a man walking, followed by his shadow, but not for long... Strange fears and precautions are the matter of this work, that tries to show us the different ways to understand the same feeling.

NAIVNA PRICA (NAIVE STORY) is the last work present in Animacam.tv. A young country dweller finds herself in the big city for the first time. With a more comedy side, the author bring to us a classic matter turned around to a different sense and understanding...
Publicado por Unknown en 14:09