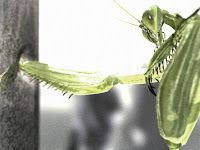 When we walked on a certain day road, we met a mantis. However, the mantis… Short comedy of mantis that has super-power and unfortunate couple.

Watch out! When you think on a tough guy, you imagine a strong, big and incredible person who smacks, hits and kicks you in a centesime of second... But, maybe just a little green insect could be your worst nightmare... Amazing Japanese anime makes his featuring in Animacam.tv with this Tough guy, a retrospective animation made by Shintarou Kishimoto, who mixes 2D and 3D bringing the best reality and rudness to his mantis!