Lovely artistic concept in The Way of Hope 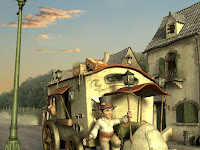 At the wheel of its caravan, Zebulon, a small travelling merchant, arrives in an old abandoned village. Feeling lonely, he tries to manufacture a companion. But things never happen as wished...

Julien Dykmans is a well-known Belgium animator and multimedia creator, specially aimed and experienced in 3D. They have created lots of 3D works like Ace Venture 3D and Orchestra and he usually prepares intensive lessons in different important animation schools and academies such as Computer Graphics at the High School Albert Jacquard in Namur.

Now, he features in the categorie short film his film The way of hope, the story of a traveller who is looking for the best escape, his fate, the best way to find his destiny... Take this out! Watch it in Animacam!
Publicado por Unknown en 18:02