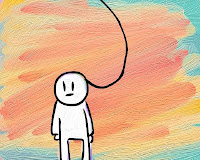 Gökhan Okur was born in 1981. He is an illustrator and graphic designer. He has been making movies since 2000. His short films have been screened in several festivals in USA, Canada, Poland and Turkey. Presently, he is a master’s degree candidate in visual communication design, and works as a freelance designer.

Nowadays, he has made lots of different animation productions with Kofti, the production company that he has created with other partners. Mixing different ways of explain different stories and carachters, using lots of techniques, experimenting and trying to get new amazing results in his animation stories.

Starting in the festivals tour in 2006 in the New York Turkish festival, Gokhan features his retrospective animation: Last train ride, talking about the first steps to the madness and insanity. After other works like Noci and Hersey Mahvoldu, Gokhan creates this year two new short films, using lines, circles and movements to express new feelings. 2 Hit Combo, a line out of nowhere, a little headache and "insert coin". And a amazing and black and white story: Wave Theory, telling a struggle between an employee and his boss.
Publicado por Unknown en 8:47