Freeze the time with... Ratrix Hero! 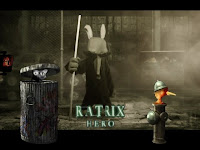 Ratrix Hero is a short animated film with a running time of 6 minutes wich takes its inspiration from the film "The Matrix". The Hero is a rat and is chased by agents with cat's head.

Nice movements, nice punchs, kicks and martial arts animations, Ratrix is a parodie of the famous and well-known trilogy movies The Matrix (Reload and Revolutions) by the Wachowsky brothers. Neo is not Keanu Reeves, is Rat, the hero, fighting against the cat-agents, and here, he has no help and friends (there is no Morpheo or Trinity), but he tried to help an orange strange bird who wants to save her babies (eggs). Awesome comedy in incredible 3D to enjoy and get some fun. Now, it's in Animacam, and the creators also present their new film release in the official trailer. The second part of Ratrix: Kaydara... Both of them available in Animacam!

Please read this to know more about the creators:

Savitri directed many animated short-films for his School of Art. His most accomplished one is, as you may expected, his film for which he had his diploma: “Kouini l’aventurier et la carte du tendre”, a film using the method of animation image by image and also computer graphics.

Raphaël, directed in 2001 a supernatural film “l’âme soeur”, then in 2004, in the same category: “la boîte à musique”. In 2005, Savitri and Raphaël join together to direct a parodical animated film which takes its inspiration from the film “The Matrix” : “Ratrix Hero”.
Publicado por Unknown en 13:36