Meinardas Valkevicius in a young great animator from Lithuania, who has created more than ten animations with only 22 years old! He loves animation world and creation in all this techniques, genres and rythms. Just, take a look on their animations: black and white, experimental, traditional 2D, 2D by computer, experimental techniques... He's like a land rover, 4x4 wheels, running and getting up inside animation world.

This animator has more than ten animations and he has featured in Animacam, five of them! His fi 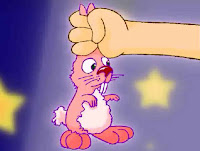 rst animation is Siuko Triumphas (The triumph of the rabbit). Sometimes, magicians are so evil and their pride is higher than everybody. But maybe, a little pink rabbit has the key to fight against him and win the honor to be a free and authentic rabbit!

Meinardas presents his relationship and fascination with animal in Fishys, and show us a colourfull and powefull oceanworld, introduced by a acuatic swimmer and dancer pengüin. Now, after land and sea, let's go

to the air. A butterfly and a flower meets each other. They have an special mixing, a nice conexion: two worlds together for evolution and understanding...
After different animal lifes, let's play with cubes, squares, triangules... Geometry could be a game when you can build, create and imagine all the forms and things, created with your own head. Everything in The little cube adventure!

And now, let's get some fun! With the funny and nice song: Beer, beer, beer. Meinardas creates this video because he likes the song, but it's not an official video. He knows how to take the right rythm and post the pictures and movements sincronized with the music...

We are proud to feature this young and great Lithuan animator in Animacam!
Publicado por Unknown en 13:22