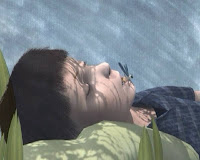 Antanas Skučas is a well-know Lithuanian animator and artist. This 25 age animator, is a graduate of M. K. Čiurlionis National Art School (Gymnasium). In 2008 he has got the degree of the Master of Arts, graduating the Vilnius Academy of Fine Arts with his diploma work – Lithuanian mithological beings (mitologija.lt).
This information was searched and pasted from the public profile of the author:

His filmography includes the Copy of Paste (2006), a humorist movie about computer icons living their own lives in a computer world, Nebaigta pasaka (Unfinished Story, 2007) is participatinf in Animacam, it's a movie on the massive die-off of a beehive (CCD). He worked together with his professor Ilja Bereznickas, on the movie Cyber Pirate. Currently he works, on the movies "Vaikystes dienorastis"(director and animator) and "The Vanishing of the Bees"(artist, animator).

Antanas is the author of a number of commercials, including the commercials of one the national TV channels, Baltijos TV, for the season of 2005/2006. He made video installations for a local pop-group Saulės Kliošas for the participation at the national Eurovision Contest, for Jurga Šeduikytė, the winner of the best female act and the best album of 2005 in the Lithuanian Bravo awards, and for other Lithuanian pop singers. At the order of the Ministry of Defense of Lithuania, Antanas made installations for a charity concert for Afghan kids in 2007.